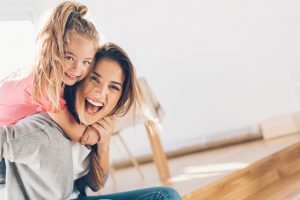 Mother’s Day – The office of orthodontist Lisa P. Howard DDS MS wants to shout out a great big, huge, humongous THANK YOU to Moms everywhere. Mother’s Day falls on Sunday, May 14th this year. So Dads…do not plan any golf that day and kids…do not plan a movie with your friends. Plan on spending the day doing whatever it is that Mom wants to do. Serving her breakfast in bed is always nice but wait until she is awake first. Flowers and homemade cards are also always a big hit so do not forget those.

History.com writes that the celebrations of mothers and motherhood can be traced back to the ancient Greeks and Romans, who held festivals in honor of the mother goddesses Rhea and Cybele, but the clearest modern precedent for Mother’s Day is the early Christian festival known as “Mothering Sunday.” Once a major tradition in the United Kingdom and parts of Europe, this celebration fell on the fourth Sunday in Lent and was originally seen as a time when the faithful would return to their “mother church”—the main church in the vicinity of their home—for a special service. Over time the Mothering Sunday tradition shifted into a more secular holiday, and children would present their mothers with flowers and other tokens of appreciation. This custom eventually faded in popularity before merging with the American Mother’s Day in the 1930s and 1940s.

Mother’s Day is a holiday honoring motherhood that is observed in different forms throughout the world. The American incarnation of Mother’s Day was created by Anna Jarvis in 1908 and became an official U.S. holiday in 1914. Jarvis would later denounce the holiday’s commercialization and spent the latter part of her life trying to remove it from the calendar. While dates and celebrations vary, Mother’s Day most commonly falls on the second Sunday in May and traditionally involves presenting mothers with flowers, cards, and other gifts.

For more information on the history of Mothers’ Day, visit:
http://www.history.com/topics/holidays/mothers-day

The Doctors and Team at the office of orthodontist Lisa P. Howard DDS MS in Scarborough ME would like to make sure that Mom’s know how much they are appreciated. They usually have to work around their own schedule and the schedule of their kids as well in order to set appointments with us. We want to make sure that you Moms are recognized for your efforts and love. Moms are truly the guardian angels that make good things happen. So, Happy Mother’s Day to all of you great Moms.